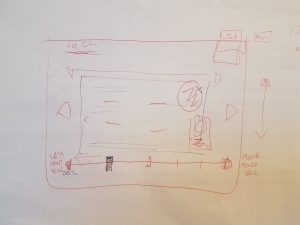 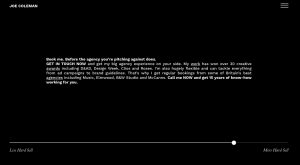 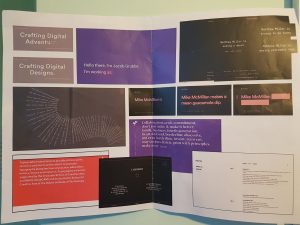 Music’s ECD, David Simpson, thought we should make the whole site about the sliding bar, as this was by far the most exciting idea in the design. I have to admit to sighing when this news was relayed to me, as I was in love with the design we had. But I thought I‘d give it a fair chance. And once I started thinking about it, I realised he was dead right.

4. As with any project, we made hundreds of micro-decisions as we went along. Should the sliding scale be from “formal” to “casual” or from “hard sell to “soft sell”? Should the font change as the messages change? How many versions of the copy did we need to make this work? How early should the images start to appear? Were images a good idea, in fact – wasn’t this supposed to be about words? Between me, Orla the Creative Director and Mike the developer, I think we got most things right. 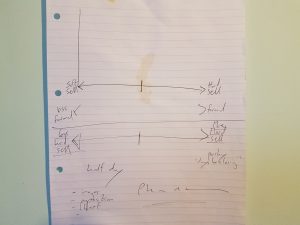 5. From the off, I’d hoped the site would be interesting enough to win industry awards, as the people who paid attention to them were exactly the people I wanted to impress. I owe the D&AD win to the sagely advice of Music’s Adam Rix (who’s won an award or two in his time). He said, “The trouble with smaller websites is that you’re always up against some kind of massively technologically advanced effort from AKQA or Nike or something. My advice would be to stick it in self promo / writing for digital categories if I were you.” Thanks Mr Rix.